Police and architects team up to eradicate crime on problem estate

The redevelopment of the 1970s Larner Road Estate is being hailed as a success for Secured by Design (SBD), the national police crime prevention initiative that works to prevent crime in the built environment.

The former council estate was widely known for its eight distinctive tower blocks, which presented a landmark to drivers travelling through Erith towards the capital from the M25.

Local residents knew it as a troubled estate and it presented huge challenges for police. Calls about crime often required a two-car response, a direct reflection of the level of crime and disorder on the estate.

Over the last five years, Larner Road has been transformed into Erith Park as part of a regeneration of the area by the housing group Orbit and its contractor Wates Residential. The tower blocks have come down and been replaced by a low to medium rise development of apartments and houses for affordable rent, shared ownership and market sale, built into traditional street patterns.

According to the Metropolitan Police, there have been no recorded offences of burglaries, drugs related offences, weapons, robberies or personal thefts within the boundary of Erith Park over the last 12 months.

Reported crime on the estate remains low in volume and impact and police have received relatively few reports of anti-social behaviour.

Despite the high density of the housing on Erith Park, it now has 80% less crime compared to the rest of the ward it sits within, according to the Metropolitan Police.

Key to this policing success has been the work of police officers trained by the Secured by Design programme. Known as designing out crime officers, they are attached to local police forces around the UK to work with architects, developers and local authority planners to design out crime at the planning stage – long before construction begins.

SBD measures improve the physical security of buildings with robust doors, windows and locks that meet SBD standards as well as crime prevention techniques designed into the surrounding layout and landscaping. These techniques include increasing natural surveillance so strangers can be seen clearly and limiting cut-throughs and alleyways to avoid potential hiding places and escape routes.

Over the last 30 years, there have been more than one million new homes built across the UK to SBD crime prevention standards with reductions in crime of up to 87% each and every year.

Mark Headley, a Metropolitan Police designing out crime officer, said that the crime prevention measures at Erith Park were only likely to be recognisable to police – such as the high levels of natural surveillance; the defensible space to mark boundaries to homes; trellis on top of fencing to make climbing more difficult; roller shutters on the undercroft to protect parked vehicles; and ground anchors in sheds to secure possessions like bicycles.

“Residents are unlikely to recognise these as measures to keep them safe and secure – for them Erith Park is just a natural, attractive, open estate that you feel safe in,” he explained.

SBD development officer Lyn Poole, who is on secondment from the Metropolitan Police, said: “This was the first SBD development to have access control systems installed with data-logging in multi-occupancy apartment buildings – providing a video and audio record of attempts or requests to enter the building – an important potential source of evidence when investigating criminal activities. In this respect Erith Park was ahead of its time.”

The driving force behind Erith Park has been Orbit, the UK’s largest developer of affordable housing, with over 42,000 homes under management.

In 2005, Orbit started discussions with the local community about the estate’s future. In 2012 Wates Construction was selected as construction and development partner. The £120m project has had the support of the London Borough of Bexley and the affordable housing was grant-funded by the Greater London Authority. Built in two phases, construction started on phase 1 in March 2013 with phase 2 completed in November 2018.

Orbit head of regeneration Caroline Field said: “The perception in the wider community is that it’s an amazing transformation. Sometimes, on regeneration schemes, people say: ‘You may have built new homes, but it’s still the same place’. But with Erith Park, people can see the wider and deeper transformation – it’s not just window dressing.”

She added: “Residents on the old estate would never have let their children play outside unsupervised because it was unsafe. Today, children are allowed to do so. That’s the measure of what’s changed here.”

Wates Residential managing director Paul Nicholls said: “Erith Park is testament to the far-reaching long term impact that design can have on creating great places where people are proud to live.

“We were keen to ensure this development was truly community-driven, consulting with local residents on their needs and experiences throughout the process. This included implementing a tenure blind approach to design, hosting community events to help new networks flourish and providing training, employment and work experience opportunities for local people to upskill or get back into employment.”

The next challenge for the Orbit/Wates partnership is the neighbouring 1960s Arthur Street estate, which is on the other side of the A206 dual carriageway through Erith. It will involve demolishing three, 13-storey tower blocks and replacing them with around 300 new homes of similar look and feel to Erith Park. Construction is due to start around the middle of 2019 and also incorporate SBD crime prevention measures and techniques.

3 hours With the gates being closed on more and more UK construction sites due to the coronavirus crisis, various guidance has now been produced on mothballing sites.

1 day Construction bosses under fire for keeping their sites open have today been given support by the government.

1 hour The maintenance operations of South Africa’s national roads agency, Sanral, have been declared an essential service during the Covid-19 lockdown.

2 hours India’s Larsen & Toubro (L&T) has committed to paying its 160,000 contract workers during the Covid-19 crisis and has confirmed its contribution to a national welfare fund as well as plans to turn training centres into wards.

US designates house-building as essential business

2 hours The USA’s National Association of Home Builders (NAHB) has welcomed the designation of housing as an essential business, allowing many firms to keep working during the coronavirus crisis.

2 hours HDR has been appointed to design a 12-storey timber hotel in British Columbia, Canada. 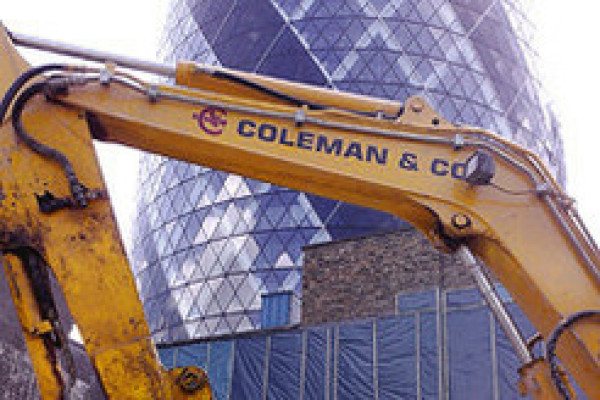 Demolition specialist says no choice but to shut down

2 hours Demolition contractor The Coleman Group has closed all its sites for at least two weeks, saying that it is not feasible to protect the health & safety of workers.