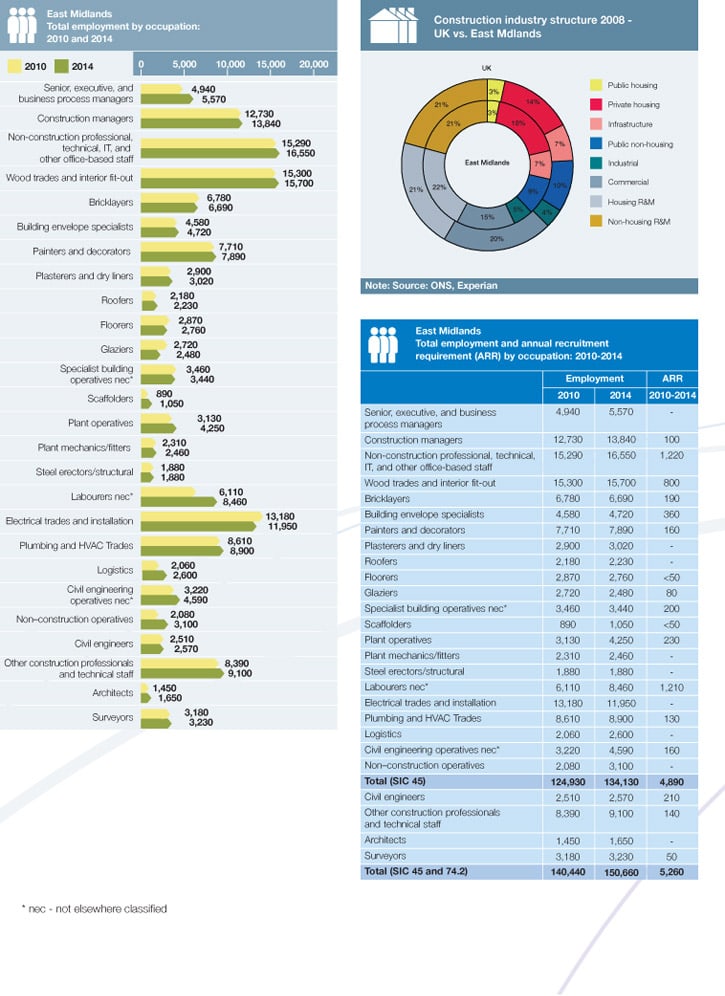 The East Midlands is ranked towards the top in annual average growth rate terms, with a projected increase of 2.6% between 2010 and 2014, well above the UK average of 1.7%. Year on- year rises over the five years are predicted to remain steady at around 2-3%, although the expectation is that the new work sector will largely be responsible for keeping the growth rate at that level. In contrast, the performance of the repair and maintenance market will be relatively subdued. Employment is forecast to increase by 7% between 2010 and 2014, but it will remain well below 2008’s level.

After severe falls in 2008 and 2009, private housing output is expected to return to growth in 2010, although the rate of increase is likely to be moderate. However, in the long term, the East Midlands is projected to have one of the fastest rates of household formation in England, and the pressure that this will put on the housing stock in the region is likely to lead to quite a buoyant outlook for new house building between 2010 and 2014.

At 2.6%, the public housing sector is expected to have the lowest rate of growth on an annual basis between 2010 and 2014. The £316m made available for new affordable housing between 2008 and 2011 should lead to year-on-year increases in output in the initial two years of the forecast period, although this should be followed by declines thereafter to 2014.

With an annual average growth rate of 6%, the infrastructure sector should be the second best performing in new work, driven by the projected outturn of 22% in 2010. This should be as a result of the £322m–£409m upgrading of the A46 between Newark and Widmerpool and the £340m scheme for the M1 between junctions 25 and 28.

Thereafter, the increases in output are likely to be in low due to a lack of planned major projects. The two new work sectors with negative average annual rates of growth between 2010 and 2014 are forecast to be the public non–housing and commercial, at 2.1% and 0.3%, respectively. Although public non–housing should benefit from the Building Schools for the Future (BSF) programme in the short-term, more constrained government expenditure post-2011 should lead to declines in output to the end of the forecast period.

One of the region’s biggest projects, the £400m Broadmarsh Shopping Centre in Nottingham, remains on hold and is an example of the difficulty being faced by retail developers as a result of depressed consumer spending. After two years of declines to 2011, improving economic conditions should allow easier access to finance for developers, thus leading to an increasing rate of growth in output to the end of the forecast period.

Between 2010 and 2014, total construction employment in the East Midlands is predicted to increase by around 7% to 150,660. In 2008, the biggest occupational group was wood trades and interior fit-out, accounting for around 11% of the total, in-line with the UK average. Of the trade occupations, civil engineering operatives nec* (43%) are projected to see the largest rise in employment, not least due to some of the major roads projects in the pipeline. Labourers nec * (38%) and plant operatives (36%) are also predicted to do well over the five years to 2014. After the East of England (7,350) and Scotland (7,220), the East Midlands’ annual recruitment of 5,260 is forecast to be the highest in the UK.