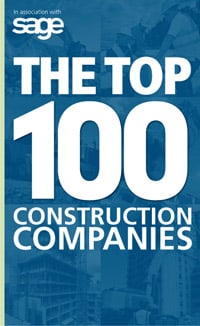 The collective turnover of the companies in The Construction Index Top 100 2012 is up marginally on the total from a year ago. So has the industry returned to growth, or at the very least, stability?

In contrast to the preceding three years, the last 12 months have not been so bad for construction. Big hitters like Rok and Connaught disappeared during 2010 and 2011. Doyle Group is perhaps the biggest casualty of 2012. Revenue of the top 100 is – in total – up a few percentage points on the preceding couple of years. Profit is healthier. So does this mean that construction has ridden out the worst of the storm, and the industry is now at a more sustainable size? Probably not, unfortunately.

For instance, the UK's biggest construction group, Balfour Beatty, has sustained growth on the back of its impressive expansion abroad. But in the UK it has cut 650 staff from its 12,000-strong workforce this year, and closed 35 offices.

The contractor is recognising that the size of the pie is shrinking, particularly in what it calls 'the post-Olympics world'.

No change from 2011
Bold denotes a newly listed company

All companies ranked according to their most recently filed accounts.