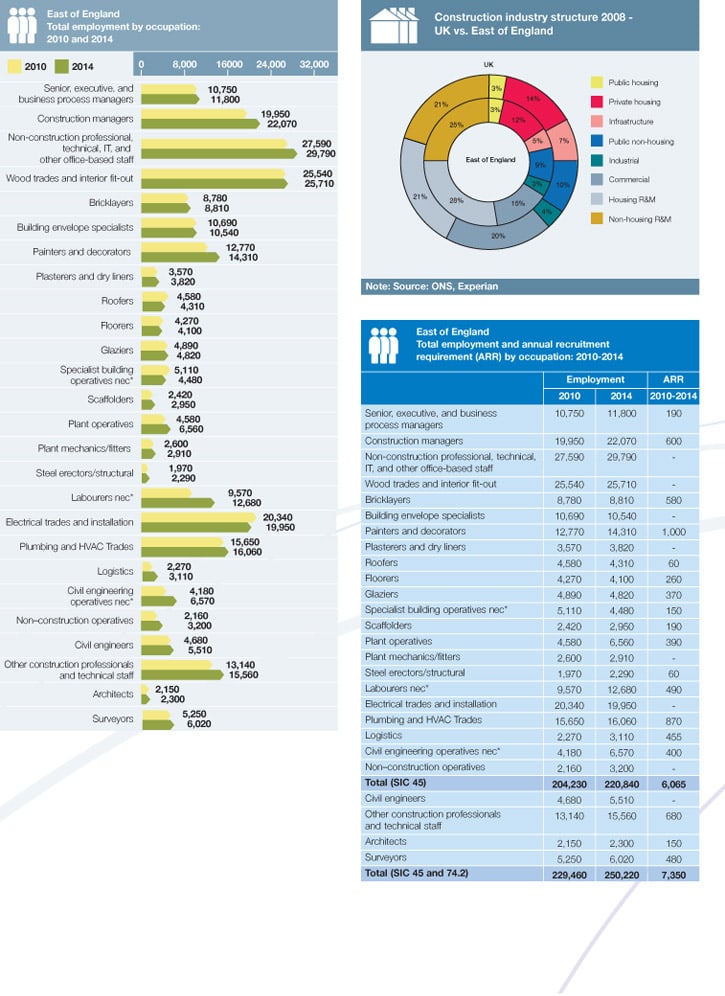 Between 2010 and 2014, total construction output in the East of England is expected to grow at an annual average rate of 3.8%, considerably higher than the UK’s average of 1.7%. Over the same period, the repair and maintenance (R&M) sector (accounting for 53% of total construction output in 2008) is predicted to grow slowly relative to the new work sector, thus leading to new work becoming the dominant market by 2011. Employment is projected to total 250,230 in 2014, slightly below the 2008 level due in particular to significant falls in R&M activity in 2009 and 2010, which is much more labour intensive than new work.

Of the regions and nations in the UK, the East of England is forecast to be the only one not to see annual average declines in any of its new work sectors over the medium term. The best performing sector is projected to be infrastructure construction, with average growth of 13.4% in each of the years between 2010 and 2014. Roads projects in the early part of the forecast period – such as the duelling of A11 between Barton Mills and Thetford, and the A120 between Braintree and Marks Tey, are likely to be the driving forces behind the high rate of growth. The Felixstowe Port scheme is already onsite, thus contributing to the high rate of growth for the infrastructure sector. The forecast assumes that a start is made on the London Gateway Ports project in 2011. Private housing output is likely to grow by double-digits in annual average terms between 2010 and 2014. At 11.1%, construction should be driven by underlying demand for housing as the flow of mortgage credit to consumers picks up and confidence in the housing market returns. The public housing sector should benefit from the uptake in private housing as delivery of social housing units through section 106 resumes, while pressure to increase the provision of affordable housing should also lead to an upward trend in activity.

The healthy average annual rate of increase (8.9%) for industrial output between 2010 and 2014 is predicated upon recovery in the manufacturing sector and rising warehouse construction activity in the hinterlands of the new port schemes. In contrast, the modest rate of growth for public non-housing over 2010–2014 is likely to be a function of pressure on the government to reduce public expenditure post-2011. Drivers in the early part of the forecast period such as the Building Schools for the Future (BSF) Programme and the Primary Capital Programme are likely to be particularly prone to cuts. The commercial sector should also have a weak growth rate over the medium term (0.2%) due to the large falls in activity predicted in the early part of the forecast period.

In 2014, total construction employment in the region is expected to reach 250,230, up 9% on the 2010 projected total but down 0.8% on the 2008 outturn. The largest trade occupation in 2008 was wood trades and interior fit-out, accounting for approximately 11.4% of the total construction employment in the East of England. This was broadly in-line with the UK average. Between 2010 and 2014, civil engineering operatives nec* are expected to see the greatest growth in employment (11.4%), while plant operatives (43%) should also do very well, not least due to the strength of the infrastructure sector. Finally the annual recruitment requirement for the region stands at around 7,350 in the region, with painters and decorators (1,000) and plumbing and Heating, Ventilation and Air Conditioning (HVAC) trades (870) likely to be the most in demand.

Construction output in the East
of England is expected to grow
at an annual rate of
3.8%