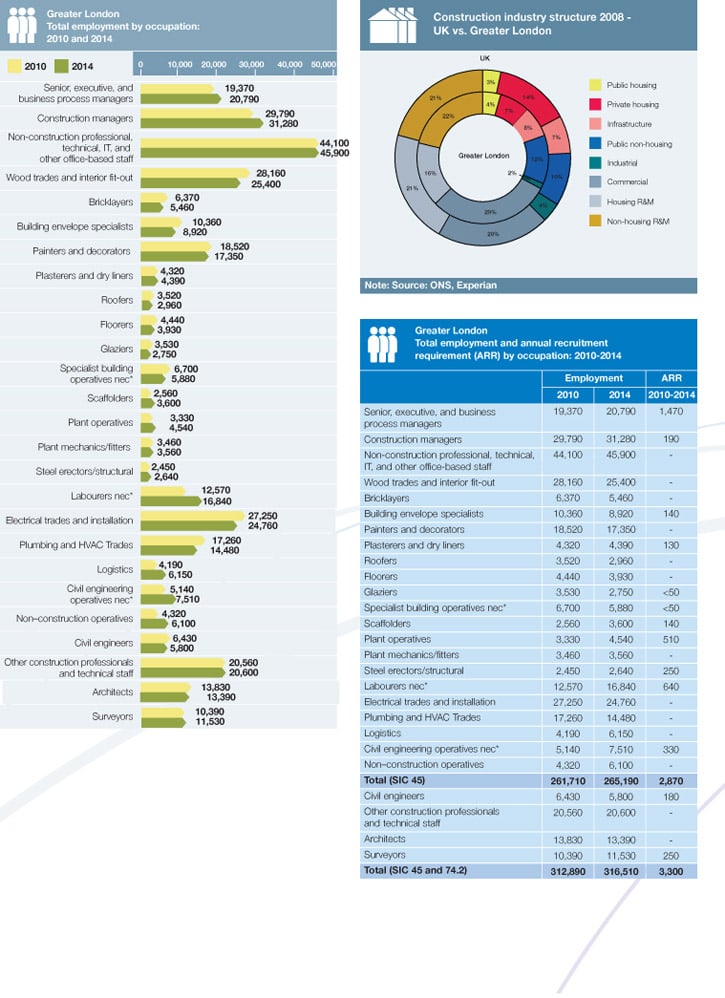 Greater London has the largest construction market among the English regions and devolved nations, overtaking the South East in 2007. Output is expected to grow in the capital at an annual average rate of 2% between 2010 and 2014, a little higher than the UK average of 1.7%. New work dominates in the region, accounting for 63% of output in 2008, compared with 58% in the UK as a whole. This dominance is predicted to increase over the forecast period as new work grows but repair and maintenance (R&M) declines. Employment is forecast to reach around 316,500 in 2014, just over 1% up on 2010’s level, but nearly 10% below 2008, as most growth is expected in capital intensive areas of the industry, such as infrastructure.

There are significant variations projected across the construction sectors in Greater London between 2010 and 2014 with robust growth rates in both the housing sectors and infrastructure and more modest rises or declines in the rest. By far the most buoyant sector is expected to be the infrastructure one, with its 17% plus annual average growth rate in large part predicated on the Crossrail project. Funding for the Crossrail project was confirmed in the pre-budget report and even if there was a change of government in 2010 it is hard to see the project being cancelled with around £3bn having already been spent by that time. There are arguments that the project could be scaled down or spread over a longer period of time, but the former would somewhat defeat the object of the scheme in the first place and the latter would ultimately mean a higher cost.

Public housing output is also expected to grow strongly between 2010 and 2014, although the rate of growth will slow after 2011 as the 2008–2011 Affordable Housing Programme (AHP) completes. The feeling is that public funding for the sector post-2011 will at best be flat and thus growth in the second half of the forecast period will be heavily predicated on social housing providers’ ability to raise private finance. In the private housing sector the underlying strength of demand in the capital is likely to push activity up. In the short term, London should benefit from the Kickstart programme, with over £52m allocated by the end of November to help nine stalled mixed tenure projects across the region.

Construction employment across the region is projected to fall sharply between 2008 and 2010 and then slowly pick up again to 2014. However growth over the forecast period is a very modest 1.2% to around 316,500 by 2014, constrained by the fact that output will be rising in the less labour intensive sectors, such as infrastructure, and falling in the more labour intensive repair and maintenance sectors. Finally the annual recruitment requirement (ARR) for the region stands at around 3,300, relatively low in relation to its size. The largest requirements are likely to be for labourers nec* (640) and plant operatives (510), although those most in demand on a relative basis (as a % of 2010 employment) are expected to be plant operatives (15%) and steel erectors (10%).

By far the most buoyant
sector is expected to be
the infrastructure, with over
17%
annual average growth,
predicated largely on the
Crossrail project.