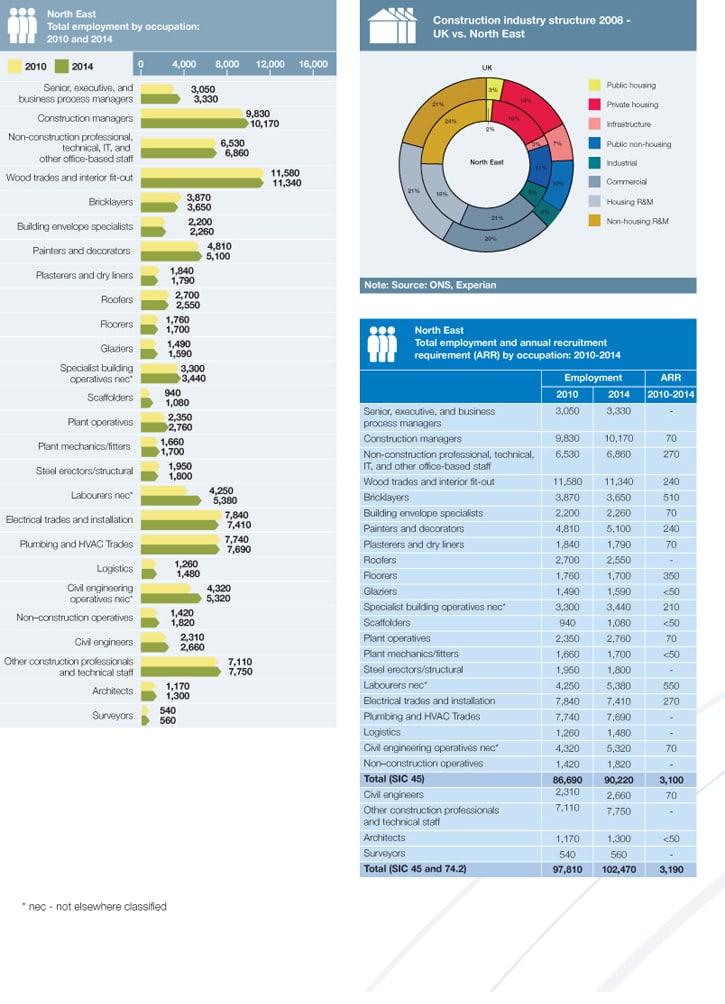 Construction output in the North East is forecast to increase at an annual average rate of just 0.6% between 2010 and 2014, weaker than the UK figure of 1.7%. Growth is expected to be stronger in the repair and maintenance (R&M) sector than in new work over the forecast period, with housing R&M work particularly robust. Employment is expected to rise to around 102,500 in 2014, 4.8% above employment in 2010, although still significantly below 2008’s level.

There are significant variations projected across the construction Over the 2010–2014 forecast period, the most buoyant sector in the North East will be the industrial sector, with an annual average growth rate of 6.4%. Work is due to start on the hinterland work related to the expansion of Teesport in 2012, and this will be a significant driver of output in the sector. However, in the short term, the public housing sector is expected to fare particularly well, growing at an annual average rate of 11% in 2010 and 2011, due to increased government funding from projects such as Kickstart. Towards the end of the forecast period, output in the public housing sector is predicted to rise only modestly, largely as a result of lower funding allocations as government spending comes under increasing pressure and the current Affordable Housing programme ends in 2011.

The private housing sector has been badly affected by the credit crunch and subsequent recession over the past few years, however recent signs of improvement will continue and lead to a modest recovery over the forecast period. Growth is expected to average 4.3% in each year to 2014, as demand conditions continue to strengthen and uncertainty over job security begins to evaporate. The outlook for the public non-housing sector is much gloomier. It is the only sector in which output is expected to decline over the 2010–2014 period, and at a significant annual average rate of 11.4%.

Government spending will come under significant pressure over the next few years as attempts are made to reduce the rapidly ballooning public deficit, and this will lead to lower availability of funding for education and health projects, among others. This will be exacerbated by the spending cuts that were expected due to government funding having been brought forward to try to ease the pain of recession. Total construction employment in the North East is predicted to reach 102,470 in 2014, 4.8% higher than 2010’s level but 18% lower than construction employment levels in the region in 2008. The largest trade occupational group was wood trades and interior fit-out in 2008, which accounted for 12.7% of total construction employment, slightly higher than the UK figure of 11.2%. The strongest employment growth between 2010 and 2014 is expected to be for labourers nec* (27%) and civil engineering operatives nec* (23%). The annual recruitment requirement for the region is 3,190, with labourers nec* (550) and bricklayers (510) expected to be the most in demand.The Sage, Gateshead

Over the
2010–2014
forecast period, the most
buoyant sector in the North
East will be the industrial
sector, with an annual average
growth rate of
6.4%