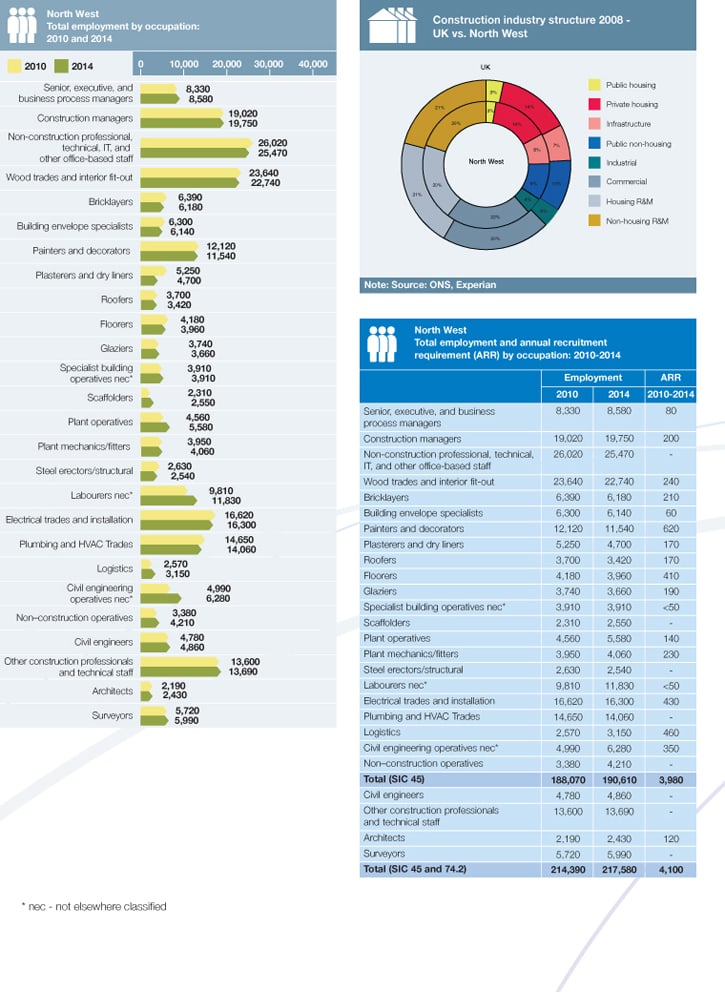 Between 2010 and 2014, total construction output in the North West is expected to increase at a negligible annual average rate of just 0.1%, significantly below the UK’s average of 1.7%. A stronger performance from the new work sector will be the main factor behind this weak growth, with repair and maintenance output forecast to decline each year, on average. Employment in the region is expected to increase to around 217,600 in 2014, 1.5% higher than 2010’s level.

The most buoyant sector in the North West is likely to be the infrastructure sector, with an annual average growth rate of 5.2%.

The planned Mersey Crossing is due to start in 2011, and this will significantly boost output in the sector. In addition, work on Phase 3a of Manchester Metrolink is underway and due to be completed by 2012, along with a number of projects at Sellafield, including construction of a new facility.

The private housing sector is also expected to fare well over the 2010–2014 period, with growth accelerating towards the end of the period as housing market conditions continue to strengthen. There have been some recent signs of improvement, and these are likely to continue into 2010, as the macroeconomic climate strengthens and consumer confidence picks up. Although there are concerns that recent increases in house prices are more reflective of restricted supply rather than improved demand, this situation will begin to reverse once concerns about job security begin to abate and credit conditions continue to gradually ease.

Government debt is already beginning to come under increasing scrutiny and public spending cuts are inevitable. This will impact on the public non-housing sector and the North West could be particularly vulnerable to cuts in the Building Schools for the Future (BSF) programme, as it has been one of the main beneficiaries of its early Waves. The public non-housing sector is forecast to fare worst over the 2010–2014 period, with an annual average decline of 8.7%.

However, the public housing sector is expected to see average annual growth of 4.7% over this period. This is largely due to strong growth in 2010 and 2011, as work on the 2008–2011 Affordable Housing programme (AHP) continues, in addition to higher levels of government funding in the form of the Kickstart programme. Rates of increase will ease significantly after 2011 as government funding cuts begin to be felt.

Total construction employment in the North West is predicted to be 217,580 in 2014, 1.5% higher than in 2010, but 20% lower than 2008’s level. Wood trades and interior fit-out was the largest trade occupational group in the region in 2008, accounting for 11% of total construction employment, in line with the UK figure. Employment growth between 2010 and 2014 is expected to be strongest for civil engineering operatives nec* (26%) and logistics (25%).

The region’s annual recruitment requirement is 4,100, with painters and decorators (620) and logistics (460) expected to be the most in demand.