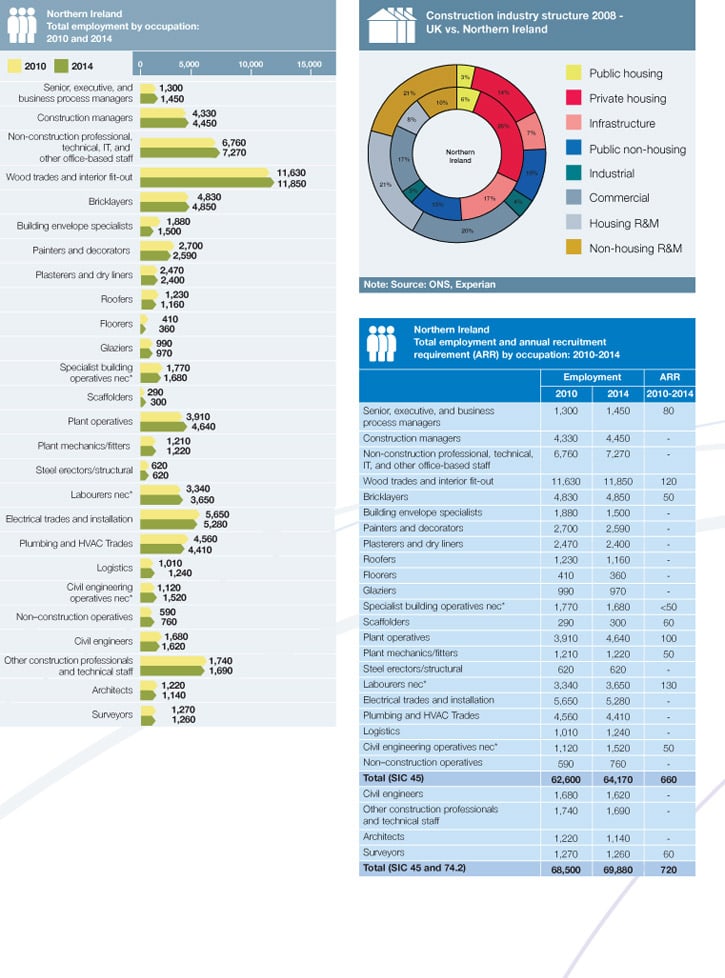 Between 2010 and 2014, total construction output in Northern Ireland is expected to rise at an annual average rate of 1.1%, somewhat lower than the UK’s average of 1.7%. New work activity is expected to be stronger than repair and maintenance (R&M) and thus the R&M share of the total is likely to shrink further in the province, where it makes up a much smaller share of total construction activity anyway compared to the UK as a whole (18% versus 42%). Employment is expected to reach close to 69,900 in 2014, a 2% rise on 2010’s level but 14% down on its 2007 peak.

Increasing concerns have surfaced in the province regarding the future of funding for the Northern Ireland Investment Strategy and it is these concerns that are leading to a fairly modest rate of output growth between 2010 and 2014. In the short term it is the private sectors that are suffering, such as private housing, industrial and commercial, not only in Northern Ireland but across the UK as a whole. As these sectors begin to recover when the economy improves, the need to address ballooning public debt will lead to public expenditure cuts. Unfortunately for Northern Ireland, its economy is more reliant on the public sector than the UK as a whole, as is its construction industry and thus public expenditure cuts are likely to affect the province disproportionately.

Across the UK as a whole the infrastructure sector is projected to be the best performing, while in Northern Ireland it is likely to be the private housing sector as credit conditions ease and demand returns to the market. However, even here, the average annual growth rate is likely to be only a moderate 3.6%, significantly lower than in the most buoyant areas.

Industrial construction is forecast to be the next strongest sector, although this is largely on the premise that with output in the sector dropping to a historic low in 2009, the only way is up. It is likely to be a long slow recovery for manufacturers as they await a sustained upturn in global trade, or particularly with other members of the European Union, and thus can take advantage of the current weakness of sterling.

Activity at the Titanic Quarter is likely to drive commercial construction activity in the province over the medium term, although there are sizeable retail developments planned for other towns as well, such as Newtownabbey, Newtownards, and Lisburn. However, growth in the sector is expected to be at best modest over the forecast period. Under threat will be activity in the infrastructure and public non–housing sectors as prospective public expenditure cuts start to bite. In particular it is likely to affect projects under the Investment Strategy that have not yet reached invitation to tender and this is a significant number of schemes, particularly in the education market. Work currently on site in the infrastructure sector, such as A4 dualling is likely to deliver growth in the sector in the short term and keep the rate marginally positive over the whole of the 2010–2014 period. The public non–housing sector, in contrast, is projected to contract between 2010 and 2014 by around 1.4% a year. The relatively low annual average output growth rate for Northern Ireland implies a very modest rate of employment growth for the province, projected at 2%, once productivity gains have been factored in, which delivers an Annual Recruitment equirement (ARR) of 720.