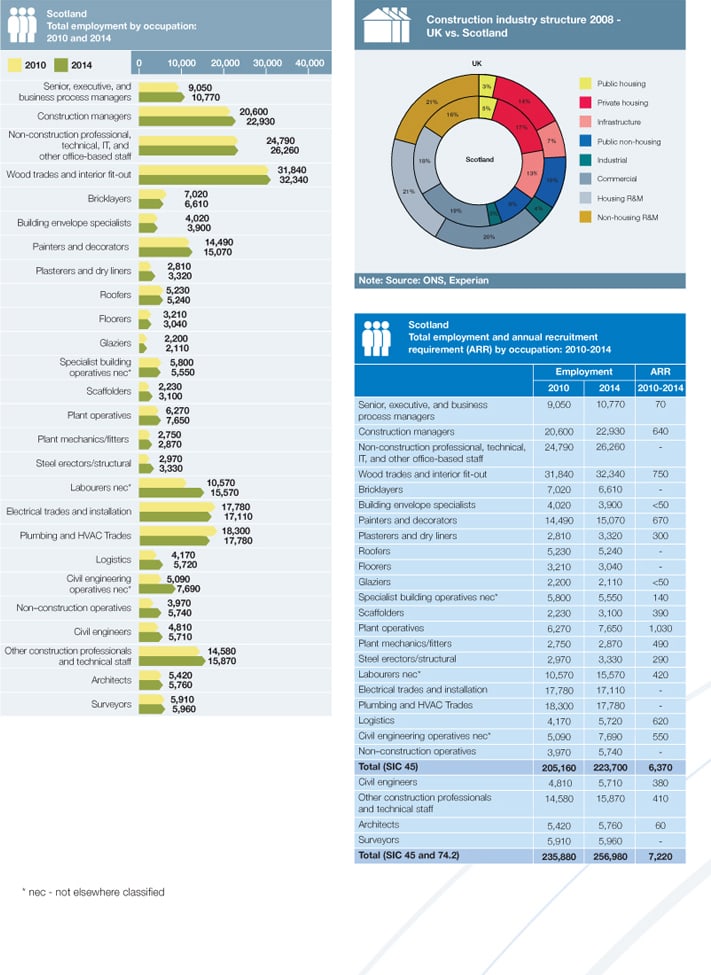 Between 2010 and 2014, total construction output in Scotland is forecast to increase at an annual average rate of 2.8%, higher than the UK’s average of 1.7%. New work output is expected to see stronger growth than repair and maintenance over the forecast period, which is likely to see the new work sector continue to remain relatively more important in the nation than it is in the UK as a whole. Employment is expected to increase to around 257,000 in 2014, 1.2% above 2008’s level.

The strongest sector in Scotland will be the private housing sector, with an annual average growth rate of around 10%, significantly more buoyant than the next strongest sector, public housing. However, whilst the recovery in private housing is likely to be fairly strong throughout the 2010–2014 period, the public housing sector is expected to see substantial growth in the short term, however output will rise only moderately towards the end of the period due to lower funding allocations as government spending comes under increasing pressure. The underlying demand for private housing remains, and once confidence returns to the market and concerns about job security begin to abate, this demand will filter through to the housing market.

Infrastructure output is currently driven by Transport Scotland’s investment programme, which is continuing apace. There are a number of major programmes of work underway, including the Edinburgh tram project and the Airdrie-Bathgate rail line. A number of significant road schemes are also providing a stream of output, and work on the A90 Aberdeen Western Peripheral Route is due to start in 2011. However, with additional funding for the Forth Replacement Crossing highly unlikely, output growth is expected to tail off significantly at the end of the forecast period as funding for this project will have to largely come from the current budget.

The Scottish Government’s budget for 2010 showed signs of what is to come as funding allocations were lower than expected, although this was partly due to investment being brought forward to try and ease the pain of the recession. Government spending is going to come under severe pressure over the next few years, and this will lead to lower availability of funding for education and health projects, among others. Thus, with the exception of 2010, public non-housing output is expected to decline in each year of the forecast period, with an annual average rate of decline of 8.3% forecast to 2014.

Total construction employment in Scotland is predicted to reach 257,000 in 2014, 9% higher than in 2010 and around 1% above 2008’s level. The largest trade occupational group in 2008 was wood trades and interior fit-out, accounting for 13.8% of total construction employment, slightly higher than the UK figure of 11.2%. Between 2010 and 2014, the strongest employment growth is expected to be for civil engineering operatives nec* (51%) and labourers nec* (47%). The annual recruitment requirement for Scotland is 7,220, with plant operatives (1,030) and wood trades and interior fit-out (750) expected to be most in demand.

The strongest sector in
Scotland will be the private
housing sector, with an annual
average growth rate of around
10%