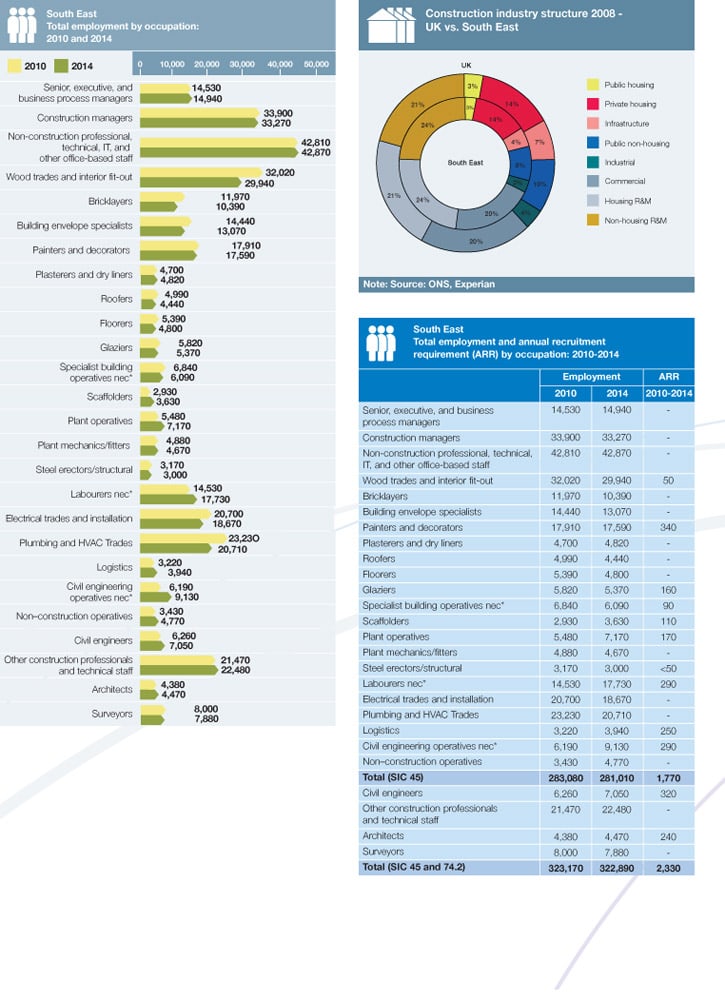 Total construction output in the South East is expected to increase at an annual average rate of 0.8% between 2010 and 2014, weaker than the UK’s average of 1.7%. This muted growth will be largely due to a relatively stronger performance from the new work sector, with repair and maintenance (R&M) likely to see an annual average decline in output over the period. Employment in the region is predicted to total around 322,900 in 2014, 0.1% lower than 2010’s level.

The infrastructure sector is expected to be the most buoyant over the 2010–2014 period, increasing at an annual average rate of 6.7%. Work started on the M25 widening work in Spring 2009, with the project due to be completed in time for the Olympics in 2012. In addition, the £425m redevelopment of Reading station is expected to get underway in 2010 and work is due to be finished in 2015. Output in the public non–housing sector is expected to decline in each year of the forecast period, as the government significantly scales back expenditure in order to contain its ballooning deficit. However, the South East relies much less than other regions and devolved nations on the public sector to fund investment in construction and thus may not be as badly affected as other areas of the UK. The annual average decline in public non-housing output is predicted to be 3.9% over the period to 2014. The public housing sector is likely to be affected by cuts in investment, with the next Affordable Housing Programme (AHP) unlikely to be see any significant increase. However, the sector is expected to fare well in the shorter term, with work on the current AHP continuing, along with developments benefiting from the Kickstart programme.

The private housing sector is predicted to return to growth in 2010 and output will increase in each year of the forecast period. There have been some recent signs of an upturn in the housing market and the recovery will strengthen over the coming months, as the macroeconomic climate continues to improve and consumer confidence picks up. There are concerns that the recent month-on month house price rises are more reflective of restricted supply rather than a sustained recovery in demand, although demand should rise as credit conditions continue to ease and concerns about job security begin to abate.

Construction employment in the region is expected to total 322,890, a very slight decline of 0.1% on the projected level for 2010 and 14% lower than employment in 2008. Wood trades and interior fit-out was the largest trade occupational groups in the South East, accounting for 10% of total construction employment in the region. The strongest construction-specific employment growth between 2010 and 2014 is forecast for civil engineering operatives nec* (47%) and plant operatives (31%). The annual recruitment requirement for the South East is 2,330, with demand expected to be strongest for painters and decorators (340) and civil engineers (320).

Total construction output in
the South East is expected to
increase by
0.8%