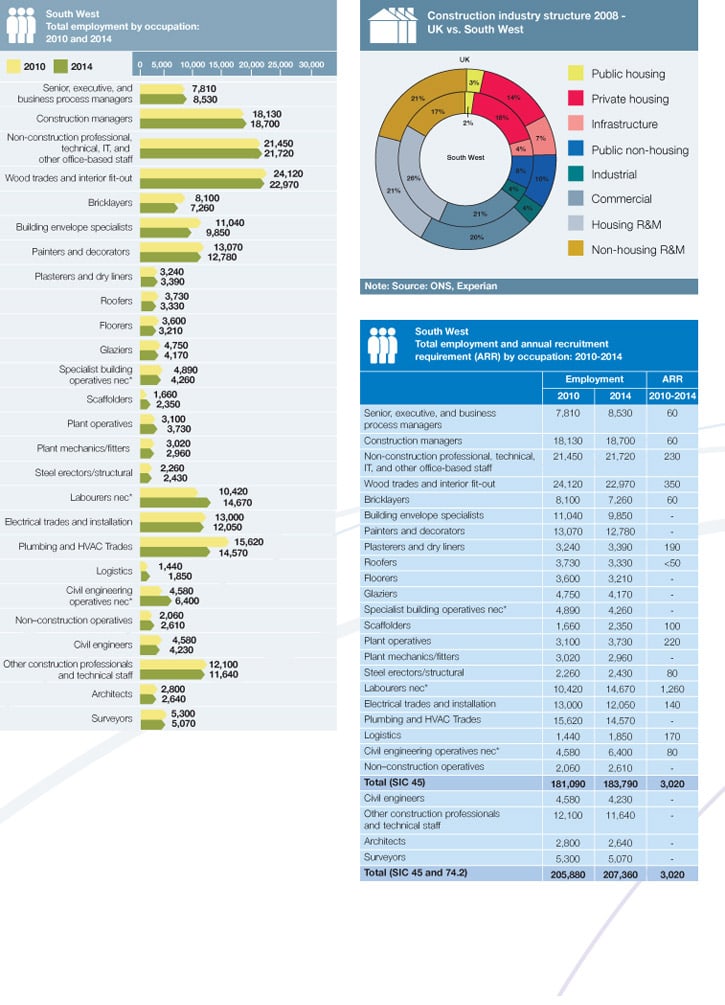 At 0.4%, the South West is expected to have one of the lowest annual average rates of growth in the UK between 2010 and 2014. The repair and maintenance (R&M) market is likely to be responsible for the weak prognosis due to its negative projected outturn of 1.8% per year, in contrast to the new work market which is forecast to grow by 2.3%. Total construction employment in the region is likely to reach 207,360 in 2014, less than 1% above the 2010 level.

The public non–housing and commercial sectors are expected to be the only ones in new work projected to see annual average declines between 2010 and 2014, of 5.9% and 0.6%, respectively. Public non–housing construction output has grown very strongly in the region in 2008 and 2009, despite the lack of Building Schools for the Future (BSF) projects. However, falling government expenditure going forward is likely to mean that output has peaked in the sector in 2009 and that activity will decline during the 2010 to 2014 forecast period. Meanwhile, the poor performance of the commercial sector is projected to be as a result of declines in the initial two years of the forecast period when demand for retail, office and entertainment floorspace is expected to be extremely limited. However, from 2012 onwards, output in the sector should grow at an increasing rate as projects such as the £475m PFI redevelopment of Southmead Hospital for North Bristol NHS Trust and the £350m redevelopment of Kings shopping centre in Gloucester begin to come online. In contrast, the private housing sector should have the highest rate of growth on an annual average basis in the South West between 2010 and 2014. At 9.1%, the sector should benefit from funding through the Kickstart programme getting projects moving again, while an easing in mortgage lending and stabilisation in house prices should further boost demand. The recovery of the private market should help in the delivery of social housing units through section 106 agreements, while Homes and Communities Agency (HCA) funding of over £130m to provide 2,736 affordable homes should further improve matters for the public housing sector. The average rate of growth for this sector is predicted to be 2.5% per year between 2010 and 2014. The performance of the infrastructure sector should be relatively buoyant when compared to other new work sectors in the South West. With an annual average rate of growth of 5.1%, output should see increases in each of the years between 2010 and 2014. The £87m Weymouth Relief Road should help provide a stream of output in the short to medium term, while the construction of the Hinckley Point nuclear power station should also be a contributory factor behind the growth in the latter part of the forecast period. However, the omens for the Severn Barrage scheme are not good with reports suggesting that the government may indefinitely postpone the project as part of its cost cutting drive. In 2014, total construction employment in the South West is expected to reach 207,360, up slightly on the 2010 projected figure of 205,880.

In 2008, the biggest occupational group was wood trades and interior fit-out (27,090), accounting for around 12% of total construction employment in the region, slightly above the UK average. Between 2010 and 2014, scaffolders (42%), labourers nec* (41%) and civil engineering operatives nec* (40%) are expected to see the largest increases in employment, while specialist building operatives (-13%) and glaziers (-12%) are predicted to be among the 12 occupational groups likely to see falls. The annual recruitment requirement for the South West is expected to total 3,020, with labourers nec* (1,260) and wood trades and interior fit-out (350) expected to be the most in demand. The Eden Project, Cornwall