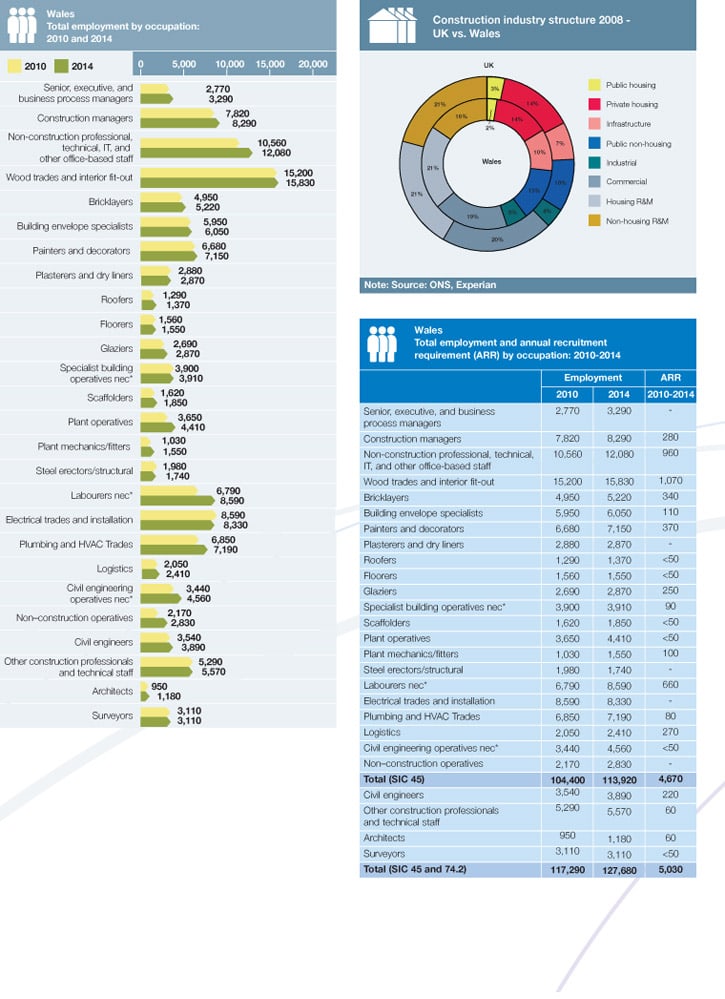 At nearly 8%, the private housing sector is expected to have the highest annual average growth rate between 2010 and 2014. Output should grow especially strongly in the medium term as a combination of underlying demand for housing, an easing in credit lending conditions and a stabilised house market drives developers to increase their construction activity. However, the improvement will be from a very low base as output in sector has now dropped to levels not seen since the recession of the early 1990s.

The infrastructure sector is predicted to have a similarly robust annual average growth rate although increases in output are likely to be in the earlier part of the forecast period. A number of large road projects, such as the £350m dual three-lane motorway link between Magor and Castleton and the £140m development of the A465 Trunk Road will get underway and the £800m 200MW combined cycle gas turbine generating station in Pembroke should also contribute to output over the forecast period. The industrial sector is projected to be the next best performing in Wales between 2010 and 2014. On an annual average basis, output is expected to grow at a rate of 3.9% as improving economic conditions and increased domestic and export demand provides the impetus for manufacturers to build new facilities. This should lead to steady, but moderate, growth in the sector from 2011 to the end of the forecast period, although again from a historically very low base. Public housing output is expected to grow particularly robustly in the short term as funding to build social housing units begins to stream through from the Welsh Assembly. However the rate of growth should slow in the medium term, before output drops into negative territory in the final two years of the forecast period, as constraints on public expenditure begin to bite in earnest.

The public non-housing and commercial sectors are the only ones in new work to have negative annual average growth rates over the medium term (-1.7% and -1.1%, respectively). The public non–housing sector is expected to suffer as a result of falling public expenditure in the latter part of the forecast period as the UK government attempts to address its ballooning deficit, while the commercial sector is predicted to suffer in the shorter term (2010 and 2011) due to fragile consumer confidence and weak spending growth.

In 2014, total construction employment in Wales is projected to reach 127,680, down marginally on the 2008 figure, although up 8.9% on the 2010 figure. The largest trade occupational groups in the principality in 2008 were wood trades and interior fit-out (16,950) and construction managers (8,710), with the former accounting for around 13% of total employment and the latter 8%. The greatest growth between 2010 and 2014 is expected to be for the plant mechanics/fitters (50%) and civil engineering operatives nec* (33%) groupings, with the latter predicated to benefit from the strength of the infrastructure sector. The annual recruitment requirement for 2010–2014 for Wales is projected to stand at around 5,030, with wood trades and interior fitout (1,070) likely to be most in demand.

The annual recruitment for
Wales is likely to be
5,030
well above the UK average.