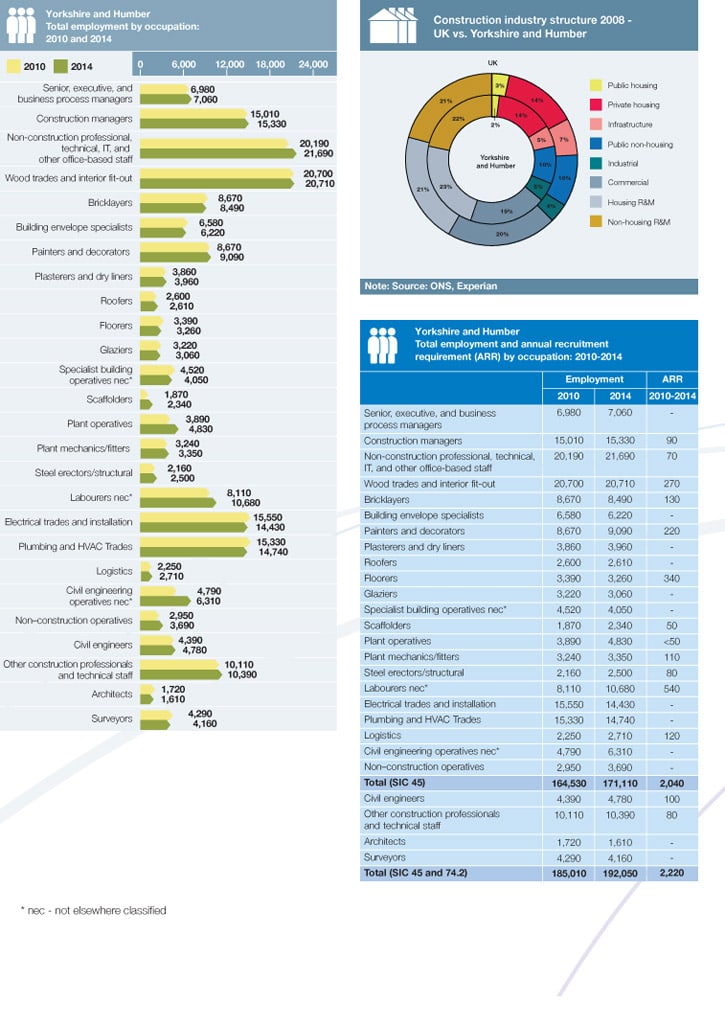 The annual average rate of growth in construction output for Yorkshire and Humber is expected to be 1.6% between 2010 and 2014. This is broadly in line with the UK figure of 1.7%. The new work sector is forecast to see an annual average increase in output over the forecast period, whilst the repair & maintenance sector will generally see no change in output. Construction employment in the region is predicted to reach just over 192,000 in 2014, 3.8% higher than employment in 2010, but still significantly below 2008’s level.

The most buoyant sector over the 2010 to 2014 forecast period in Yorkshire and Humber will be the private housing sector, with an annual average growth rate of 10.3%. The recent weak improvements in the housing market are likely to strengthen in 2010 and the recovery in demand will be more sustained. This increase in demand will underpin the growth that is expected in each year of the forecast period. The public housing sector is also forecast to fare well, although growth will largely be in the shorter term. The government has recently announced increased investment in housing, largely through the Kickstart Delivery programme, which is designed to help restart stalled mixed-tenure developments. However, in the longer term, the public sector will not be immune from the inevitable public spending cuts and this will dampen growth.

The outlook for the infrastructure sector is also rosy, with annual average growth of 6.1% over the 2010 to 2014 forecast period. Contracts were let on the Dishforth to Leeming section of the A1improvement scheme in 2009 and work is well underway. This, along with further sections of this project, is expected to be the main driver of growth in the sector, with output forecast to rise in each year to 2014. Public non-housing output will be hit by the government spending cuts that are likely from 2011 onwards. Investment in education and health projects, among others, will be significantly scaled back as the government attempts to reduce the rapidly ballooning public deficit. Funding for waves 1-4 of the Building Schools for the Future (BSF) programme is probably guaranteed, however future waves are much less certain. The annual average decline in public non-housing output is forecast at 4.6%.

The annual average rate of
growth in construction output
for Yorkshire and Humber is
expected to be
1.6%