12 Oct 20 The Russian government is keen to mend relations with the UK. But its ambition to lure overseas businesses with attractive construction and infrastructure opportunities may have been ruined by Covid-19. Eugene Gerden reports

Two years on from the attempted assassination in Salisbury of Russian double-agent Sergei Skripal and his daughter Yulia, relations between the Russian and UK governments are worse than at any time since the collapse of the Soviet Union in 1991.

But this year the Russian government has demonstrated a desire to start restoring its relations with the UK. Recent statements by senior officials of the Russian Presidential Administration and some local analysts suggest that Vladimir Putin wants to create suitable conditions for the attraction of British business to Russia.

Some progress has already been achieved, boosted in part by the telephone conversation, during the 75th VE Day celebrations in May, between Putin and UK prime minister Boris Johnson. During a conversation in which the two leaders discussed international efforts to combat Covid-19 and the need to maintain dialogue and improve bilateral relations, Putin confirmed Russia’s intention to create conditions for the return of UK business to Russian markets.

In fact, Putin regularly conducts meetings with representatives of British business operating in Russia. Prior to 2019-2020, a particular focus for the Russian state was the strengthening of cooperation with some major UK-based producers of hydrocarbons, such as BP. More recently, though, interest in opportunities for expansion into Russian markets has been expressed by companies from other sectors of the UK economy, including construction.

As for Russia, the country’s construction sector is expected to shrink by about 4% as a result of the Covid-19 pandemic but the market is still developing and long-term growth prospects are thought to be good, thanks to the government’s intention to build its way out of the pandemic – just like Boris Johnson’s plan to “build, build, build”.

The Russian government is already taking steps to attract overseas construction companies for the implementation of various public-sector projects within the territory.

In February of this year – citing data published by Global Infrastructure Hub, an Australia-based consultancy specialising in sustainable infrastructure development worldwide – Russia’s ministry of construction announced a plan to attract up to US$740bn (£565bn) of foreign investment in the domestic construction sector over the next 20 years.

The aim is to harness inward investment and foreign expertise for a range of government projects ranging from large residential developments to major infrastructure projects similar to the building of the controversial Crimean bridge that was completed last year.

Most leading Russian and UK analysts in the field of construction believe the expansion into the Russian market could be of interest to UK developers, especially those that are looking for new opportunities for growth amid the current times of crisis in the domestic market. But much will depend on the ability of Russia and its authorities to ensure the provision of clear and transparent rules for doing business in Russia.

Mikhail Ermilov, a senior partner of NEO Center, one of Russia’s leading analysts and consulting agencies in the field of construction, says:

“While modern Russia has always been considered by Western construction companies as a country of risky investments, it can offer the level of profitability of local construction projects in the range of 12% to 15%, compared to 2% to 3%, which is typical for the UK and other Western countries.

“From its own side, Russia is very interested in cooperation with construction businesses from the UK and has been sending signs about the reduction of risks of doing business in the country to potential investors since 2017,” adds Ermilov.

Such projects are usually controlled personally by the most senior government officials, including the president, and receive support from the state in both direct and indirect form.

But Russian analysts also believe that there are big opportunities for UK investors to expand in Russia’s commercial real estate sector. The advantage here is the relatively short payback period associated with the implementation of such projects, which usually do not exceed two or three years.

At the same time, Russian developers hope that the residential property market could also prove attractive to UK investors and contractors, since demand for new homes remains high despite the economic problems exacerbated by the ongoing Covid-19 pandemic.

In the meantime, some UK analysts think that Russia might indeed offer opportunities for growth for some UK construction business, especially in the wake of the pandemic.

“Any new benefits that are directed at helping companies to establish themselves are welcomed and would be looked on favourably by UK construction companies.

“However, there are also other issues that should be addressed to increase UK construction competing in Russia,” says Kelly. “For example, although there have been tangible efforts to improve corruption, government interference, protectionism and high levels monopolisation, more will need to be achieved, and any improvements should be promoted and vocalised through media channels.

“Undeveloped infrastructure is an issue, and finding trained skilled labour at all levels who adhere to professional working practices can be a problem. Acquiring construction permits can be an issue depending on the part of the country that the project is being carried out in. Overall, it is good to note that Russia is opening up to foreign companies and is actively welcoming them. Good stable governance alongside the new benefits will assist companies to establish themselves in Russia,” adds Kelly.

This is a view shared by Brendan Sharkey, head of construction and real estate at London-based accountant MHA MacIntyre Hudson. “There is no reason why our international construction companies would not go to Russia if there is a guarantee over safety and repatriation of profit – assuming they get paid, which has been a problem when they have worked in the Middle East,” says Sharkey.

“Thinking aloud, the UK government could take a lead in supporting this and giving assurances to the contractors. The work would need to be profitable; the UK has the technicians and the Russians could provide the labour,” he adds.

It must be said that the majority of UK contractors appear to have no desire to pursue opportunities in Russia, preferring to focus on the domestic market and those places overseas where they already have an established presence. Nevertheless, not everybody rules out the possibility of expansion into Russia – if the circumstances were right and the UK market weaker.

Some UK-based construction firms already operate in Russia. Katie Deeble, group head of communications at foundations specialist Keller Group, points out that “while we have a UK business, we’re a global operation that already operates all over the world”. Working in Russia would be nothing new for Keller, which has carried out numerous jobs there, including a huge £35m foundations contract for a major residential development in central Moscow which it secured in 2013.

During 2006-07, when the Russian economy experienced rapid growth thanks to high oil prices and successful economic reforms, profit margins in the country’s residential construction sector grew (according to senior state officials) by as much as 300% – or even 700% on some projects. Industry estimates are more conservative but, even so, most developers put the figure at over 40%.

For its part, the Russian government would like to see more overseas construction firms bidding for more residential and commercial real estate projects. But, in general, UK contractors just don’t go there. The construction market has always been one of the most closed segments of the Russian economy and that means that the cost of building a square metre of living space has always been a major trade secret for Russian construction companies.

In the majority of large Russian cities the construction market is also heavily monopolised, usually being controlled by a handful of local companies that are close to local authorities. So far, large construction companies from the UK and the EU have been unable to penetrate these markets; with their advanced technologies and high labour productivity, the activities of Western firms would have created serious problems for the local players.

A decade ago, it was not unknown for UK investors to announce plans to expand into the Russian market. For example, in 2007 Aberdeen Property Investors, the Sweden-based property division of Aberdeen Asset Management, announced plans to establish a €1.5bn (£1.35bn) fund to invest in Russian property. But for several reasons, including those outlined above, the plans were never implemented.

At around the same time another bold venture was announced by London-based developer Parkridge Holdings, which planned to build up to a million square metres of commercial real estate in Russia. But again, local difficulties, the global recession and the start of the sanction wars put paid to all this. Parkridge itself succumbed to cashflow problems during the credit crunch and collapsed in 2011.

Russia – is it worth the gamble?

Russia’s construction sector has suffered as a result of the Covid-19 outbreak, with several major projects mothballed or cancelled (writes David Taylor) Consequently, the Russian construction industry’s output is expected to contract by 3.8% in 2020, a significant downward revision from the 2.6% growth previously forecast by UK-based data and analytics company GlobalData.

“The economic conditions have worsened in Russia with market consensus expecting the Russian economy to contract by 4% in 2020,” said Moustafa Ali, economist at GlobalData. “With downside risks remaining, a further downward revision of the forecast is likely if the lockdown measures are extended and the economic situation worsens.”

GlobalData reports that, on 16th April 2020, Russia pledged to support the country’s construction sector while the lockdown measures are in place. “The government added that the sector will be one of the key drivers of economic growth once the virus outbreak subsides,” said Ali.

He added: “The lockdown measures imposed at the end of March 2020 and the low oil prices will weigh down growth in the construction industry, with projects likely to be delayed or cancelled as they become less profitable over the coming months.”

4 hours National Highways has shortlisted five companies shortlisted for £1.9bn of work to design and build roads north and south of the River Thames on the proposed Lower Thames Crossing.

6 hours Lead times for concrete roof tiles are averaging between 24 and 30 weeks, according to the latest shortages update from the Construction Leadership Council.

7 hours Following yesterday’s news that Kier has been trialling HVO fuel and signed the Plant Commitment Charter, today we learn that all Kier Highways depots and work compounds have been designated ‘no idle zones’.

1 day Manufacturers of construction products are being asked to promise not to lie, cheat, obfuscate or seek to confuse with their marketing literature in a new industry initiative. 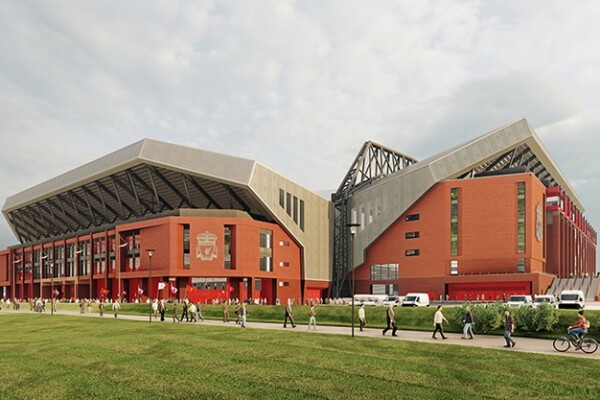 8 minutes Liverpool Football Club has today confirmed that it is going ahead with the planned £60m expansion of its Anfield Road Stand with Buckingham Group Contracting as its principle contractor.

Vistry to build over 96 acres of Devon