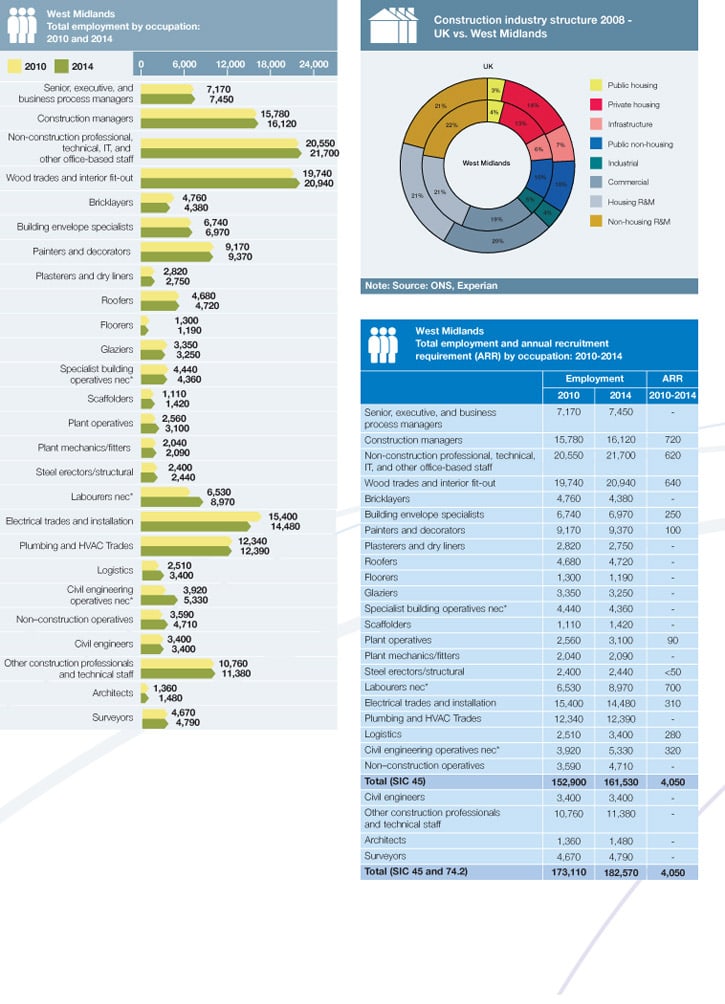 Total construction output is expected to increase at an annual average rate of 1.5% between 2010 and 2014 in the West Midlands, slightly slower than the national average of 1.7%. New work is forecast to have a higher rate of growth when compared to repair and maintenance (R&M), at 2% and 0.8%, respectively. Two of the six new work sectors are projected to see declines over the medium term, public non-housing and commercial, while private housing and infrastructure are expected to be the best performing. In 2014 total construction employment in the region is predicted to reach 182,570, up 5% on the 2010 projection.

The construction industry in the West Midlands has grown by just 4.7% over the eight years to 2008. This is well below the national average of 21% and less than all the other regions and devolved nations in the UK, with the exception of Northern Ireland. Looking forward, private housing at 8.1% and infrastructure at 7.7% are the sectors likely to have the highest annual average growth rates between 2010 and 2014. The latter is expected to see a significant stream of output coming through roads projects such as the hard shoulder running scheme on the M6 between junctions 8 and 10a and the A46 Newark to Widmerpool improvement project, which crosses both Midland regions. A further boost should come from the £600m enhancement programme for Birmingham New Street, where construction is due to be completed on phase one of the project in 2012.

Although underlying demand for housing has been depressed during the recession, our expectation is that stability in the housing market and improved lending conditions should be drivers behind the private housing sector in the medium term. In the short term, the sector will benefit from the Kickstart Delivery programme, designed to help stalled mixed tenure developments get started again. The healthy growth in output in the early part of the forecast period for the public non–housing sector should be offset by strong declines in the three years to 2014. Overall an annual average rate of decline of 4% between 2010 and 2014 is projected, making the sector the weakest in the region. In Birmingham, the West Midlands has the largest BSF project in the country, while other schemes include the ones in Sandwell, Wolverhampton, Coventry, Worcestershire, Walsall and Staffordshire. However, there are significant risks associated with projects that have not got on site before a prospective new government in 2010 starts to assess where public expenditure cuts should fall.

Weak consumer spending and growing unemployment are likely to be the main obstacles for retail and office construction in the commercial sector. Following two years of decline in 2010 and 2011, improving economic conditions should help output to bounce back in 2012, albeit weakly. However, the rate of growth should increase in each of the years thereafter to 2014, as confidence returns to the corporate sector and it begins to invest in new facilities.

Between 2010 and 2014, total construction employment in the West Midlands is expected to grow by 5% to reach 182,570. Of the trade occupational groups, labourers nec* (37%), civil engineering operatives nec* (36%) and logistics (35%) should see the largest increase in employment over the period. At 20,940, the largest trade occupation in 2014 is estimated to be wood trades and interior fit-out, constituting 11% of the total workforce. The annual recruitment requirement of 4,050 for the West Midlands is expected to be broadly in-line with the national average. The region contends with significant net outflows from its construction workforce thus there is expected to be a need to replace them.

In 2014 total construction
employment in the region is
predicted to reach
182,570