It has taken a decade but finally another mobile crane manufacturer has decided that Tadano was onto something when it introduced its Lift Adjuster anti-sway system. Swaying loads are one of the biggest challenges that face crane operators. Good operators pride themselves on being able to ‘catch’ a load, to make use of the full combination of movements available – winching, slewing, telescoping, boom up, boom down – to keep load movement under total control. It is rather like a waiter sashaying across a busy room with a tray of drinks held aloft on his fingertips making continuous tiny adjustments to avoid any spillage. However, humans are imperfect and mistakes happen. Although it is not often that you will see a waiter drop a tray and it is probably rarer to see a crane operator crash their cargo against an obstacle, it is best to design-out risk where possible. And the ability to control sway is not just about avoiding collision; it is also about maximising the speed of operations.

Load sway is a particular issue for containerhandling cranes which are required to stack boxes precisely, one on top of another. These cranes can control sway by virtue of the fact that the containers are generally lifted by an arrangement of ropes and winches to create a four-point lift. Sensors can detect the relative position of each corner of the box and tell the winches to respond accordingly to keep the load level.

For mobile cranes, it is somewhat trickier because loads are mostly lifted at a single point. Even when complex spreader beam arrangements are used, there is a single sheave at the boom tip focusing all the forces on one place.

One of the load sway problems that mobile crane operators face is the tendency of a load to move relative to the crane as it leaves the ground. Modern telescopic crane booms are made of relatively thin high-tensile steel, making them light, long and strong. While this is mostly good, the downside is that they also flex like a fishing rod. The heavier the load and the more the boom is extended, the more they flex. And the more the boom flexes, the  greater the tendency for the load to sway as it leaves the ground.

In 2004 Tadano of Japan came up with a solution for this load sway. If the crane operator switches on the Lift Adjuster system (there is a switch on the control panel) boom deflection is monitored and the hoist cylinder automatically adjusts to compensate for the change in radius caused by the deflection. Lift Adjuster ensures that the load moves in a true vertical path when lifted from the ground, without boom flex inducing deviation. It switches off automatically immediately the safe load torque is reached.

Tadano’s rivals appear to have largely ignored the issue of load sway, trusting in operators to continue to use their own good skill and judgement – until now, that is. More than a decade after the introduction of the Tadano Lift Adjuster, Liebherr has introduced its solution to the problem, which it calls Vertical Line Finder.

This control feature ensures that the load on the rope is hoisted in true vertical. Activated by pressing a button on the joystick, crosshairs on the monitor show whether the lift rope is in vertical position. If it isn’t, the boom and hoist winches and the slew motor work together to make it so. This function ceases when the operator releases the button or as soon as the maximum lifting capacity of the crane is reached.

Liebherr says that its vertical line finder improves site safety by preventing collisions and extends the service life of the crane by making lifting operations smoother and reducing stress on the boom.

This is because the system has been developed by Liebherr’s Nenzing factory in Austria. The large crawler cranes and the telescopic cranes are made at Liebherr Ehingen in Germany, which sees no need for the system on its products because they are generally used for one-off lifts rather than the repetitive duty-cycle applications that the Nenzing cranes are designed for. Ehingen’s view is that the new system is of little or no benefit for mainstream lifting applications. Where Liebherr has gone further than Tadano, however, is in adding horizontal load path control. This is also activated by pressing a button on the joystick. The load is then moved horizontally at a constant height, with boom and hoist winches coordinated. This feature is likely to be particularly useful when conducting blind lifts, where the operator does not have a constant view of the load.

Liebherr’s active damping technology came from its harbour crane division, also based in Nenzing - sway control, as previously noted, being a big issue in maritime applications. The system uses a gyroscope fitted near the top of the rope, below the sheave, to monitor the rope’s deviation from vertical.

Although Mitsubishi has used gyroscopes to control load spin in its harbour cranes, Liebherr’s technology, developed in conjunction with the University of Stuttgart’s Institute for System Dynamics, is believed to be the first practical application of gyroscopes in mobile cranes.

Germany has been home to most of the engineering innovations in crane boom technology over the past 20 or 30 years, and here is another one. Tadano’s allterrain crane division in Germany has come up with a boom concept that reinvents telescopic crane geometry.

Tadano’s new eight-axle, 600 tonnecapacity telescopic crane, the ATF 600G-8, has not one metal tube for its boom but three. Parallel to the main boom are two socalled “power tubes” that provide flexural and torsional stiffness.

Where other cranes of this size rely on complex rope-based rigging systems to support the boom, the ATF 600G-8 is entirely self-contained.

An immediate concern must be that having three booms instead of one must add weight but Tadano says that the total system weighs no more than a conventional boom. Simply, the same amount of steel is distributed across the three tubes rather than all in one. Not only does the triple boom have the advantage of torsional strength over ropeguyed single booms but it also makes the ATF 600G-8 much quicker to mobilise, it is claimed. There is no need to transport a boom suspension system and all equipment can be delivered on just six trailers. Once on site, there is no boom suspension system to set up or dismantle. Just squirt out the boom and start lifting, just as if it was an everyday 50 tonner.

Although the geometry is new, the technology inside the boom is not. It uses the same single-cylinder telescoping and boom pinning system that other cranes use. Having no back-mast and guy ropes means that this machine’s tailswing is just 6.95m - roughly half that of other eight-axle cranes – so it can be used on tight sites too narrow for other cranes of this capacity.

In engineering there is always a trade-off and here it is boom length. At just 56m, fully extended, the main boom is far from the longest in its class. Liebherr’s 500-tonner extends to 84m, for example. But with the addition of 24 - 90m boom extensions, the Tadano offers a maximum sheave height of 146m and a maximum lifting radius of 104m. There is also the question of price, which could be a determining factor in the commercial success of the ATF 600G-8. At time of writing, this has not been divulged. It will be interesting to see what happens next. There is a long history of often factious competition among the German crane manufacturers to set new boundaries to innovation. For many years Demag led the way in telescopic boom design; it developed the Superlift guying system to provide support for long booms in the 1970s and ‘80s and then in 2001 unveiled the Sideways Superlift to provide lateral support for booms in near vertical set-up. Liebherr responded with its own design, which it called the Y-Guy, only for Demag (by now under Terex ownership) to sue for patent infringement. The two rivals eventually came to a mutually acceptable agreement out of court.

That was not first time that Liebherr and Demag had come to blows over boom technology. In 2000 Liebherr forced Demag to redesign its pinning mechanism after demonstrating its patents had been infringed. (Liebherr pioneered a system that used a single pin to reduce boom weight and therefore enable longer booms to be produced, thus gaining commercial advantage.)

A man who remembers these battles well, and perhaps carries the scars to prove it, is Alexander Knecht, one of the world’s leading crane designers. He spent much of his career at Demag, rising to chief engineer and then managing director before moving to head up Tadano Faun in 2008. The Tadano Triple Boom is of course the result of team work – five people are named as its inventors on the patent documentation – but Knecht’s name is listed first. After his experience of the Demag-Liebherr boom wars, he will no doubt be keeping his eyes peeled to see if any competitors find any inspiration from his latest creation.

This article first appeared in the July 2015 issue of The Construction Index magazine. To read the full magazine online, click here.

9 minutes Laing O’Rourke has set itself the target of being net zero in operations by 2030 and having equal numbers of male and female employees by 2033.

15 minutes Kier is trialling a new fuel-saving generator technology on a site in Lancashire.

11 minutes Images of a new £200m office development potentially to be built by Bowmer & Kirkland next to the former Broadmarsh shopping centre in Nottingham have been released.

17 minutes Winvic Construction has won a £24.5m contract to build a logistics park in in Bedfordshire. 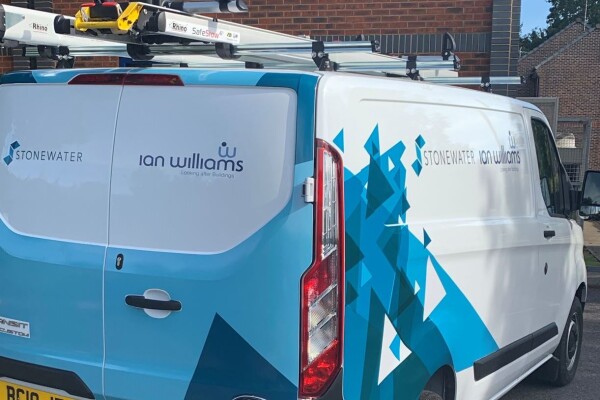 18 minutes Property services company Ian Williams has won a repairs and maintenance contract with social housing provider Stonewater that could be worth more than £26m.